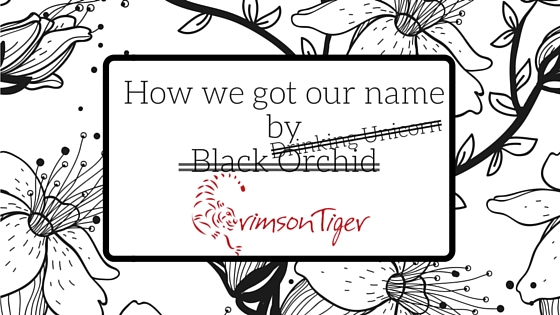 How Crimson Tiger Was Named

Recently we were asked by a customer at the Cheam Charter Fair how did we come up with the name ‘Crimson Tiger’, were we into moths?

Having seven children between us you would have thought naming a company would have been a doddle for founding directors Annie and I but no.  When we were originally setting up the company we would meet once a week in a local coffee shop and go through the recent market research, looking at suppliers and all the usually setting up an online early days business.  Every meeting there was a question mark over what do we call ourselves.  Without the name we were unable to open bank accounts, we could not start the process of having a logo designed, we were stuck until we agreed upon a name.

When it comes to naming a baby, you can read through baby naming books, look at the film and television credits, old family names, there is a vast database out there for you to refer to.  With naming a company it’s the opposite, you have a database of what you can’t call yourself because others are using it.

What was similar to baby naming was how both business partners would get together with the names they had come up with that week.  How about Buckell & Harvey (our two surnames)?  Err no, sounds like a dodgy black and white comedy.  Do we use Gift in the name?  Nope!  How about something with flowers in?  Black Orchid?  Eweh!  Sounds deadly not friendly.  So it went on for a couple of months.

Then one day Annie recalled a poem she used to like, The Paint Box by E V Rieu.  Perhaps we could be Drinking Unicorn!  Mmmmm! So Crimson Tiger was declared the winner.  Before we could get too excited that we had broken through the name barrier, we had to check with Company House that we were able to use the name.

Starting and growing a business is so similar to having another baby, from the naming to the nurturing.  It develops its own personality, it demands time and attention and not always at the most convenient times.  There are tears of frustration and tears of joy.  When we receive and email from a customer saying how pleased they are with their purchase it is just like when someone compliments your child.

Does that make me a mother of five?  Four boys and a tiger? 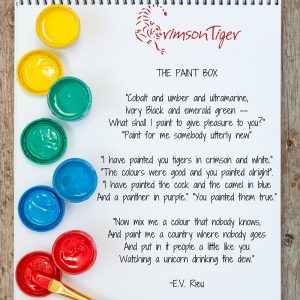