So I have just had a birthday and once again received several re-gifts.  They were obvious re-gifts, and had been plonked in their ‘gift drawer’ until the next unfortunate person had a birthday, in this case me, and happily handed over to me as a gift with no thought whatsoever as to whether they thought it was suitable for me.  Although none of this year’s re-gifts beats the time when I actually received back the gift I gave them the Christmas before as a stocking present!  It amazes me at how casually we re-gift these days and how it has become so socially acceptable to just fling the present you don’t like on to the next person’s birthday without any thought.  A gift is about the thought, not money or a thoughtless gesture.

Now don’t get me wrong, there are times when re-gifting is acceptable but it has to be done with your best judgement and integrity. 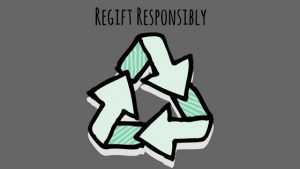 Here are Crimson Tiger’s rules to re-gifting, follow them carefully boys and girls or you could be seeing more than the recipients gift face when they open your next re-gift. 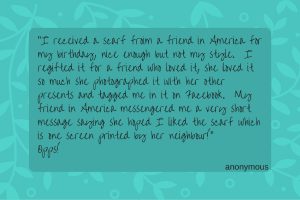 In a time where money is short and the need to recycle more essential then re-gifting, when done respectfully is fine, but also remember the local charity shops for those items that really are not suitable to re-gift.