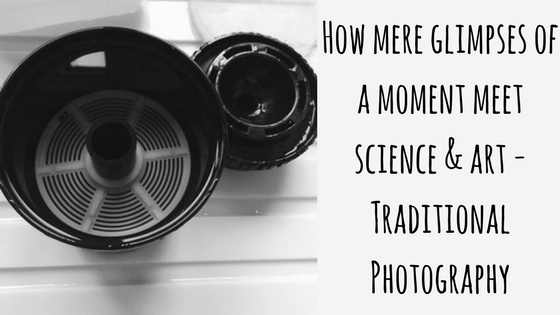 Ephemerids are photographs that depict scenes that are there for only that particular time. Sometimes this can look rather contrary to the subject for Ephemerids can be quite static looking objects or scenes that appear not to change. Change, however exists in most things and it is how we perceive the minutiae of detail that will detect this. Hence the name , for an “Ephemerid” is the latin family name of the Mayfly, the true ephemeral insect that typically sees only a day in its entire life.
Taking the photograph is not the only thing that’s “in the moment” with these pictures…it’s the creation of the actual photograph as well. Ephemerid photographs are traditional, handprinted photographs. That’s all very well isn’t it…but what does that mean? Here’s an explanation! 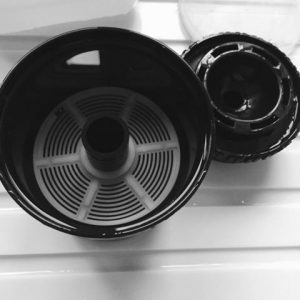 Ephemerid photographs are captured using traditional film media. Unlike digital cameras that convert light into electrical signals that are processed and stored electronically, film is a rather different creature. It is coated with a special, light-sensitive Silver salt (Silver Halide, largely Silver Bromide for the interested chemist), that, when exposed to light, it will eventually start turning black. The early pioneers of photography, Louis Daguerre and W. Henry Fox-Talbot observed this in around 1840…and, amazingly, the whole idea of film photography hasn’t really changed…that much anyway. 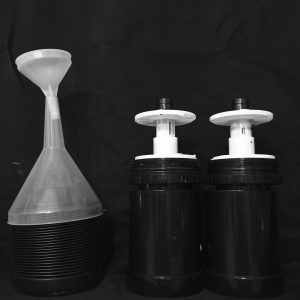 It’s often impractical to wait lengthy periods of time to expose film…so typically, what the photographer will then do is get the film and, in absolute darkness, wash some special chemicals on it to achieve an image. At this stage, if you were able to see the film, you still wouldn’t see any sort of picture and that’s because the light that’s gone on the film has only chemically changed a few molecules of the special silver salt. The word “few” here is a relative term but because our eyesight cannot resolve atomic scale resolution, we haven’t got a hope of seeing anything. One of first chemicals that we pour on our film is called a developer…this magnifies the effect of the light by millions and millions of times. This chemical takes the few changed molecules of Silver Halide and develops it into a working, usable image…so the name is very explanatory! In France, the developer is called l’ revelatuer – the revealer! 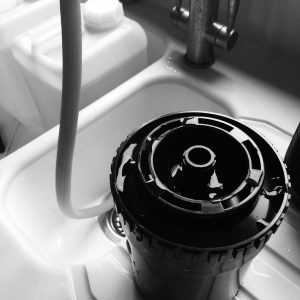 The photographer keeps the developer on the film for a pre-designated time and keeps the temperature constant throughout. At the end, this chemical is poured off the film and a stop solution is introduced…this effectively terminates the development process. Finally – the film is washed in a fixer that removes any Silver Halide that wasn’t exposed to light. The film is finally washed and it can be hung up to dry. 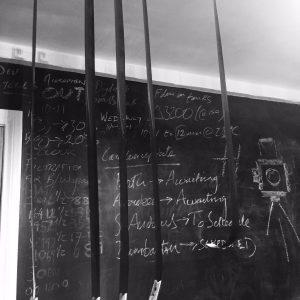 Depending on the size of the camera and the film you might use, the film will now show negative pictures. They are called negatives because they’re tonally reversed…bright, light areas are dark on the film and shadowy, dark areas are light. Remember, this is because of how the light works on the film – the more light that hits a particular spot of film, the darker it will get. 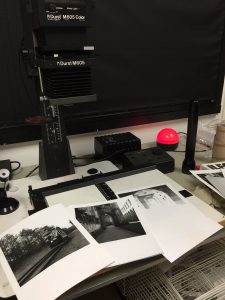 To get the photographs, we have to do another process and this is where the handprinting comes in. When the film is completely dry, it can then be loaded into what’s known as an enlarger – essentially, a very specialist projector that shines light through the negative and projects the negative-cast image. This image is focussed and then it ultimately cast onto a piece of photographic paper that contains similar light sensitive compounds that you find in film. Light is shined through the negative onto the paper for a calculated time and…guess what? Just like the film, the exposed paper has to be developed, stopped and fixed as well! The only difference is that, because the paper that is used in traditional photography is typically (not exclusively though) orthochromatic (means that it’s insensitive to red light), in a blacked out room that is only illuminated with red “safe” lights, we can actually see the development process…it is very possible to see the image being developed on the paper, since black and white handprinting can be done with the chemicals in trays and this is exactly how Ephemerid photographs are produced. 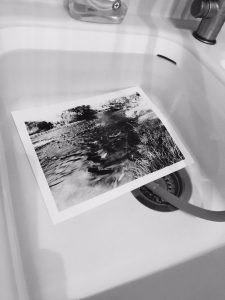 Although handprinting is a wonderful, satisfying and extremely enjoyable process, it is also incredibly labour-intensive. To get a photograph looking “just-right” can take a very long time but, certainly for Ephemerids, this method generates a look and a feel that is ironically quite tricky to replicate exactly with digital and printer technology.