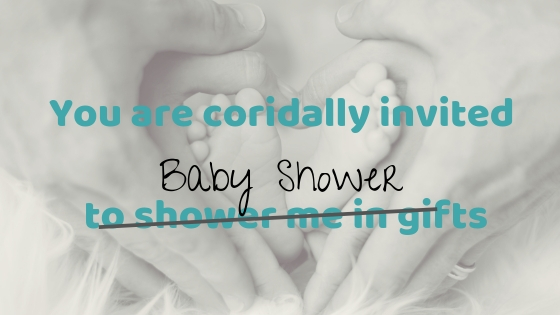 Baby Showers – they are a thing!

You can not fail to open a newspaper or social media to hear various judgements on the elaborate baby shower that was hosted on behalf of the Duchess of Sussex.  Many of the articles were written with the greenness of envy or a gloat from the traditionalist.  Love them or loathe them, the long-held tradition from the states of a baby shower is slowly gaining momentum over here.

In the past, we would perhaps have a going on maternity leave drinks after work where our colleagues would have clubbed together for a few baby grows as a gift.  Visitors, when we have had the baby would arrive with a small gift for your and the baby.  If you went down the route of a baptism or a welcome to the world party then another opportunity for a few small gifts.  It is very British to gift discreetly rather than with a Baby Shower.

What is a baby shower?

To start with you never, ever host your own baby shower.  Traditionally it was hosted by a close friend or colleague, never a member of your own family although it is now becoming more acceptable for your sister or sister in law to host it on your behalf.  Your hostess invites your friends, family and colleagues to a gathering, be it a light lunch, mid afternoon tea or evening sit down meal on your behalf to literally ‘shower’ you with gifts.  You may or may not get served alcohol bearing in mind the guest of honour is not exactly up for a drinking session but there will be party games.  Originally the games would have a leaning towards embarrassing the mum to be with the use of her old baby photos, all baby themed.  So be prepared to get involved if you get invited to a baby shower.

The shower usually happens 4-6 weeks before the baby’s due date.  If you can’t make it you are not obliged to but it can be a nice gesture so send your gift to the hostess before the event.  Often the invitation will give some gifting guidance usually with a registered list with a company but what do you give if you don’t have access to buy from the list or one doesn’t exist or even better, you rebel against such conventions?  Well, here are our suggestions.

One of our personalised necklaces with her and her partners initials with a promise note for you to send it back to us to have their new-born’s initial added to the necklace.

One of our personalised bracelets.  We have heard of people using our gemstone bracelets as a boob remind when it comes to feeding, they slip it onto the wrist of the one they are to feed from next.

Our nightlights which cast a reassuring glow at night in the nursery without any trailing wires as the nightlight is charged during the day by sunlight.

A gorgeous candle from Bear & Lamb, our current favourite is earl grey and cucumber.  Visit their Facebook page for more details. A set of colourful bamboo bibs from Slobberscarves.

Family diary from Boxclever Press, once the little one joins their family they are going to need to be more organised than ever.

To help you out we thought it would be useful to have a glossary of terms for you.

Baby shower: Not the water’s breaking before you give birth, it’s a party held 4-6 weeks on the mother-to-be’s honour.

Hostess: to avoid looking gift hungry, the mother to be gets a sucker close friend to throw a party in their honour

Mother-to-be: the one you shouldn’t call fat, big, nor offer them a gin and tonic.  Also referred to as the Guest-of-Honour.

Gender Reveal: the parents-to-be cut a cake, open a box of balloons, burst some balloons to find out if they have a pink baby or a blue baby.

Gift Registry: a tell all list about the character of the mother-to-be.  If it is all about the big gifts you know how money grabbing she is, if it’s all about gifts for her – pity the child.

Sprinkle Shower: the mother-to-be has a brood of children at home is shattered and wants some pampering.

Sip and See: the parents are fed up with the long string of visitors who turn up at all hours of the day, sit and coo over the baby, have a cup of tea which they don’t bother taking out to the kitchen when they leave, so they have a set time for visitors to see the baby and have a quick drink.

Baby Shower Games: prepare to have to guess the age the mother-to-be cut her first tooth, had her first period, or chisel a plastic doll out of ice, predict the weight of the baby.

Private Jet: the mode of transport for the mother to be and all her gifts but only if she is an A-list celebrity or a fly in the face of convention royal.